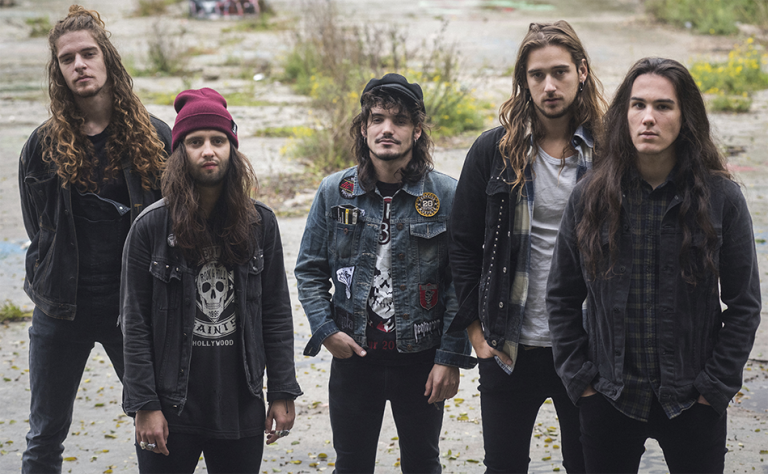 Sweet Needles is a heavy rock band from Paris.
The stage is their place to be : they put a powerfull and honest show where power rock, heavy riffs and melo-dies crosses creating their own sound and musical style.

Formed in 2012, Sweet Needles is the result of several years of friendship between the five members. Created by the twins Arthur and Oscar , quicly followed by their childhood friends Simon & Paul. Then, the 4 boys met their drummer Hippolyte at a local live show.
The band releases its first demo «Opus 33» in 2014 in a sleaze / glam rock style. Sweet Needles then changes its line-up in 2016 and welcome its new bass player, Arthur who will strenghten the band’s bounds and its creativity.

Sweet Needles goes back in the studio to record a new EP, «Broken Bones», in a more hard rock / heavy metal style. Their single ‘Failed’ recorded at the end of 2016 in Junior Rodriguez’s home studio. his single shows the band’s willingness to explore different musical kind of music. The quintet is always looking for renewing itself.
After numerous live shows and having a solid fanbase in Paris, the band leaves the city to defend its EP around France and crosses borders to play in Belgium, England and Switzerland.
In February 2019, they win the contest organized by Deezer, OUIFM, Rock Hard, MyRock & Gerard Drouot Productions and open for the famous american band POP EVIL in Paris. Then, Sweet Needles also wins the contest to play at the Raismes Festival along-side artists like Glenn Hughes, H.E.A.T, Phill Campbell etc.
Sweet Needles is now working on the release of its first album planned for the end of 2021, recorded in the studios of french Bertrand & Eric Poncet from the band Chunk! No Captain Chunk! No Captain Chunk!
Their 4 singles (Be Bop, Egotrip, Another Land and Better late than never) gives us a taste of this album : a style at the crossroads of rock’n’roll and metal, a hard rock from their generation. The band is promising a various and punchy album, bringing a breath of fresh air and a future to hard rock music without necessarily trying to fit in a box.