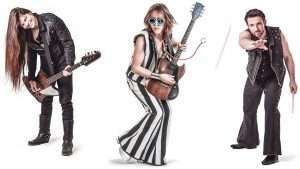 The retro rock band Doctor Victor, known mainly for their energetic live performances and uncompromised rock sound, are currently celebrating the achievement of their front man Vojta Bureš, a.k.a. Victor, who made it through to the finals of the prestigious John Lennon Songwriting Contest.
He succeeded with his song Can’t Stop Rock’n’Roll, on which he recorded all of the instruments, vocals, and which he also produced and mixed by himself. Watch a video of Victor recording Can’t Stop Rock’n’Roll HERE

This multi-genre competition, which is entered by thousands of songwriters from around the world each year, aims to pass on the legacy of John
Lennon and support up-and-coming songwriters. It was founded in 1997 and its doors are open to both professional musicians and amateurs. The contestants compete in 12 categories according to genre and the judges include, among others, singer Fergie, music legends George Clinton, Bootsy Collins, Sheila E and legendary bass guitarist Flea from Red Hot Chilli Peppers. It was them who sent Vojta Bureš to the finals with his song Can’t Stop Rock’n’Roll.

“Where have all the riffs gone?! Look no further than Doctor Victor from Prague and their John Lennon Songwriting Contest winning entry “Can’t Stop R’n’R.” This song is the embodiment of unapologetic rock & roll and most importantly brings together a refreshing combination of raw energy, noise and songwriting.” Matthew Reich – Vice President, Tours and U.S. Tours and Promotions, John Lennon Songwriting Contest

The entry fees of the contestants are also used to finance the educational John Lennon bus, which houses a mobile recording studio. Therefore, the competition benefits not only its winners, but also children from the United Kingdom, who have the opportunity of learning to record music and create video clips and documentaries as part of their school classes.
The band Doctor Victor, who are active performers, were chosen to support the legendary AC/DC during their concert in the Czech Republic.
On top of that, the energetic trio has toured the United States once and the United Kingdom twice and boasts collaborations with bass guitarist Ida Nielsen and Nazareth singer Dan McCafferty, with whom they recorded his third studio album. To this date, however, they have only released one album of their own. It bears the fitting name 1stPrescription and is available only electronically on the band’s official website.
Victor is also a recipient of the prestigious Berklee College of Music scholarship and runs the musical school Doctor Victor Academy,
where he also teaches.